NorthSec 2015: behind the scenes

TLDR: NorthSec is an incredible security event, our CTF simulates a whole internet for every participating team. This allows us to create just about anything, from a locked down country to millions of vulnerable IoT devices spread across the globe. However that flexibility comes at a high cost hardware-wise, as we’re getting bigger and bigger, we need more and more powerful servers and networking gear. We’re very actively looking for sponsors so get in touch with me or just buy us something on Amazon!

NorthSec is one of the biggest on-site Capture The Flag (CTF), security contest in North America. It’s organized yearly over a weekend in Montreal (usually in May) and since the last edition, has been accompanied by a two days security conference before the CTF itself. The rest of this post will only focus on the CTF part though. 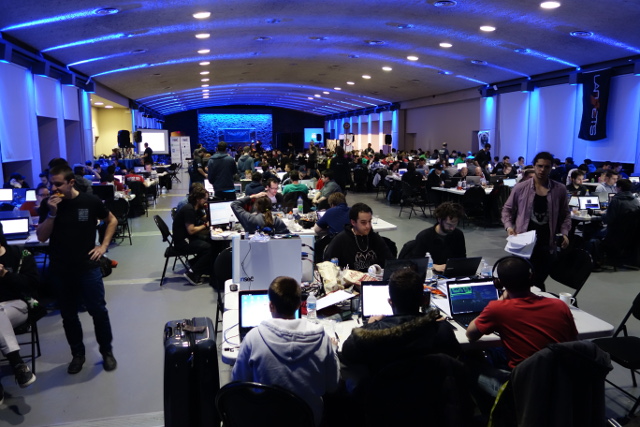 A view of the main room at NorthSec 2015

Teams arrive at the venue on Friday evening, get setup at their table and then get introduced to this year’s scenario and given access to our infrastructure. There they will have to fight their way through challenges, each earning them points and letting them go further and further. On Sunday afternoon, the top 3 teams are awarded their prize and we wrap up for the year.

Size wise, for the past two years we’ve had a physical limit of up to 32 teams of 8 participants and then a bunch of extra unaffiliated visitors. For the 2016 edition, we’re raising this to 50 teams for a grand total of 400 participants, thanks to some shuffling at the venue making some more room for us.

Why is it special?

The above may sound pretty simple and straightforward, however there are a few important details that sets NorthSec apart from other CTFs. 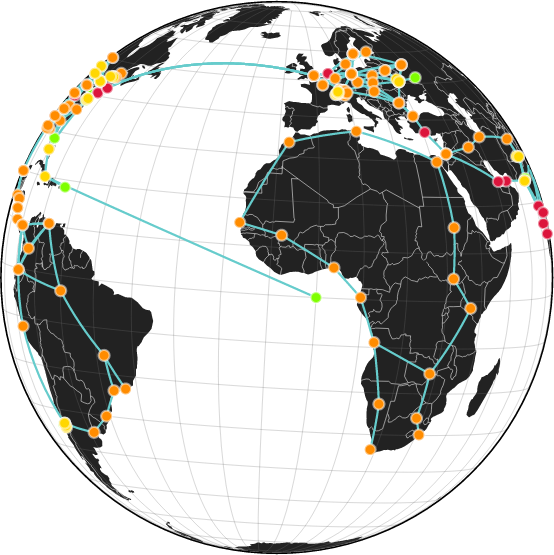 World map of our fake internet

Due to the very high bandwidth and low latency requirements, most of the infrastructure is hosted on premises and on our hardware. We do plan on offloading Windows virtual machines to a public cloud for the next edition though.

We also provide a mostly legacy free environment to our contestants, all of our challenges are connected to IPv6-only networks and run on 64bit Ubuntu LTS  in LXC with state of the art security configurations. 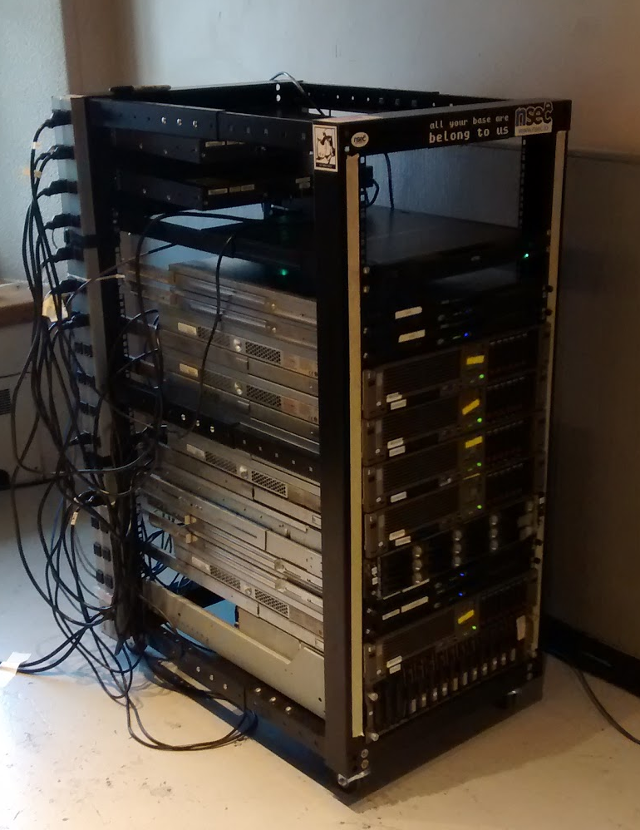 Our rack, on location at NorthSec 2015

And all of that was running on:

On average we had 7 full simulations and 21 virtual machines running on every host (the backup hosts only had one each). That means each of the main contest hosts had:

In the past editions we’ve found numerous bugs in the various technologies we use when put under such a crazy load:

As our infrastructure staff is very invested in these technologies by being upstream developers or contributors to the main projects we use, those bugs were all rapidly reported, discussed and fixed. We always look forward to the next NorthSec as an opportunity to test the latest technology at scale in a completely controlled environment.

How can you help?

As I mentioned, we’ve been capped at 32 teams and around 300 attendees for the past two years. Our existing hardware was barely sufficient  to handle  the load during those two editions, we urgently need to refresh our hardware to offer the best possible experience to our participants.

We’re planning on replacing most if not all of our hardware with slightly more recent equivalents, also upgrading from rotating drives to SSDs and improving our network. On the software side, we’ll be upgrading to a newer Linux kernel, possibly to Ubuntu 16.04, switch from btrfs to zfs and from LXC to LXD.

We are a Canadian non-profit organization with all our staff being volunteers so we very heavily rely on sponsors to be able to make the event a success.

If you or your company would like to help by sponsoring our infrastructure, get in touch with me. We have several sponsoring levels and can get you the visibility you’d like, ranging from a mention on our website and at the event to on-site presence with a recruitment booth and even, if our interests align, inclusion of your product in some of our challenges.

We also have an Amazon wishlist of smaller (cheaper) items that we need to buy in the near future. If you buy something from the list, get in touch so we can properly thank you!

Oh and as I briefly mentioned at the beginning, we have a two days, single-track conference ahead of the CTF. We’re actively looking for speakers, if you have something interesting to present, the CFP is here.

7 Responses to NorthSec 2015: behind the scenes